As most people reading this know, one of the largest, most frustrating complications of cirrhosis is all that fluid that accumulates in the body (ascites... edema... ugh), when the liver is impaired (and therefore, blood can not flow through it like it should).

I spend a lot of time listening to liver education videos, and wanted to post one that I thought was particularly good, because it explains why a person's sodium levels can get all out of whack, when they get cirrhosis.

I just assumed that the reason that my husband was told to restrict his sodium levels, was because we all know that too much sodium causes water retention, which is the very last thing you need if you already have ascites and edema.

But I recently learned, from this video, that basically, your body starts thinking it has to produce MORE sodium, when you get cirrhosis, so you are basically in SODIUM OVERLOAD when your liver gets blocked.

I recommend you watch this whole video, but to see the part I'm talking about, you scroll to around the 16:34 mark.

Here's a basic explanation of why your sodium levels increase (as explained by Armando Hasudungan), below.

When fluid starts to accumulate in the abdominal cavity, but does not return back to the heart, the heart will think it doesn't have enough blood (a condition called Hypovolemia).

Just a side note here, this may just be my own theory, but I can't help thinking that the PEMF really helped my husband with this, because it is so good at increasing blood flow... you can see some incredible videos of what I'm talking about, HERE. This machine is widely used by doctors in Europe, to improve blood circulation.

Because the kidneys aren't receiving enough blood, this activates the "renin-angiotensin-aldosterone system" (RAAS).   This stimulates the re-absorption of water and sodium from the kidneys, which increases water and sodium levels in the body, to compensate for this lack of blood supply.

In another part of the video he states again (I'm basically quoting him):

Hepatorenal syndrome is when you do not have actual damage to the kidneys, BUT due to Hypovolemia (the low fluid volume in the blood), the kidneys will activate the renin-angiotensin-aldosterone system, which will cause an increase in sodium and water re-absorption!  But obviously, your body doesn't really NEED more water and sodium because you already have tons of it, just in the wrong places!!

This video is also how I learned that the itching in cirrhosis patients is largely due to the high levels of uric acid that the liver is now unable to remove.  This was a great video (aside from the guy's chewing, lol).  Chewing or no chewing, I am grateful to Armando Hasudungan for making this. You can see a whole page of other helpful liver education videos, by clicking HERE, and click HERE to see a page of just Armando Hasudungan's videos.

Anyway, I hope you can see why you want to be sure to watch your sodium levels, when you have cirrhosis. I know, it's a hard thing to do. My husband does NOT like being told there are foods he can't eat, and neither do I!

My neighbor (whom I'll call Victor) who lived in the apartment behind us, was one of those people who didn't like being told to watch his sodium levels. One evening, almost exactly 6 years ago, in September of 2010, we saw a fire truck pull up behind our house, with red lights flashing everywhere.

I knew Victor wasn't well. I'd recently seen him walking with his daughter (whom I'll call Vickie), extremely slowly.  Jake looked like he was "channeling Victor" a year later, when he first got sick with cirrhosis... he was walking at about the same pace, as if he was 110 years old and afraid of falling.  But Victor didn't have cirrhosis... he had heart problems (Jake ALSO had a heart problem, in additioin to cirrhosis.. he was diagnosed with A-fib which was partly genetic and partly from alcohol abuse).

Anyway, when we saw the fire trucks, we knew it wasn't good news. I watched his wife and children surrounding the ambulance parked on our steet, as the emergency responders loaded him in on a stretcher.... and that was the last I saw of him. He died from heart failure, and they were unable to revive him. Worse yet. it happened on his wife's birthday!

I've mentioned before, in my post about how bad things can get, when you get cirrhosis, that my neighbor's daughter declined to have her Mom (whom I'll call Angelica) check up on my husband when I had to go on a trip in late 2013, while my husband was super sick and looked like he was dying. And this is why. She was so traumatized by her husband's death and not being able to revive him, Vickie just couldn't take the chance that her Mom was going to have to go through that kind of trauma again, especially when my husband looked just as sick as Vickie's dad did, right before he died.  Vickie was soo worried about Jake when he started to look the same way. I know she must have thought for sure, he was going to die, and I think everyone was a little shocked to see that he recovered so well (myself included). I almost felt guilty about it, that my husband had lived, when Angelica's husband did not.

I spoke to Vickie a few months later, and she told me that her Dad used to get into big arguments with her Mom, about how he didn't like the taste of the low-sodium dinners she'd make him. He hated low sodium food. She told me he had a real weakness for Chinese food, and that pretty much did him in, in the long run.

Why is it that, as soon as you know you're not supposed to eat something, it becomes almost impossible to not want to eat it???  My mother has been thin her whole life, but in her 60's, as soon as her doctor told her she shouldn't have ice cream, that was all she wanted and she gained like 20 pounds. When I tell my husband to please limit his sugar, he wants more of it. I can be exactly the same way, so believe me when I say I know from experience that it is not fun to have ANY kind of dietary restrictions. 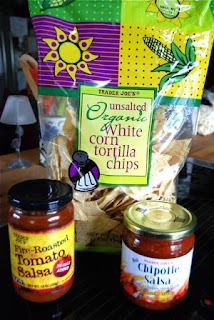 But if it can SAVE YOUR LIFE... it's worth it!!! I am grateful that, despite the fact that my husband loves high sodium foods, he has been decreasing his sodium (and recently we just discovered that Trader Joe's Low-sodium chips are AWESOME... so crunchy and good, you don't even NEED salt).

I try to look at it like, the restriction could be temporary, till you can just "get out of the woods." I know he will have to basically watch his sodium levels for the rest of his life, as most men over 50 should, but he's been able to increase his sodium a little as he's gotten better. It just takes time.... like most things in life.  The more you heal, the more you can do : )