People have asked me in the past, how to calculate a MELD score, and honestly I had no idea. But recently I looked up how to calculate it, and although I'm not an expert and you should still consult with your doctor, I'm going to share with you what I learned.

It appears that you can basically calculate your meld score with three scores, for:


Your Creatinine,
Your Bilirubin, and
Your INR.

For whatever reason, my husband did not get a MELD score calculation when he last saw his doctor (last month), and I'm assuming that it is because it is so low that it doesn't even matter anymore. His FibroScan showed that technically is out of the cirrhosis stage.  According to the Fibroscan (and this chart below), he has moved down to the fibrosis stage. Also, I want to mention that, according to this chart below, Jake is technically has moved down to Stage TWO cirrhosis (not stage 3, as his doctor written on his chart)  because his overall score is 9.37.

We found several inaccuracies that the doctor had written on his chart, and I've thought about calling them to ask that they correct them, but am not sure they will. At least I would like to see a note in his chart that I called to ask about it, because I don't think it's right that there is wrong information on there (and it bugs me that these findings are reported to the medical center and his colleagues). Although I do like Jake's liver specialist, he seemed very resistant to being able to being able to admit that Jake had made such a large improvement (without seeing a doctor or being on any medications for over a year). I suppose I shouldn't be too surprised : / 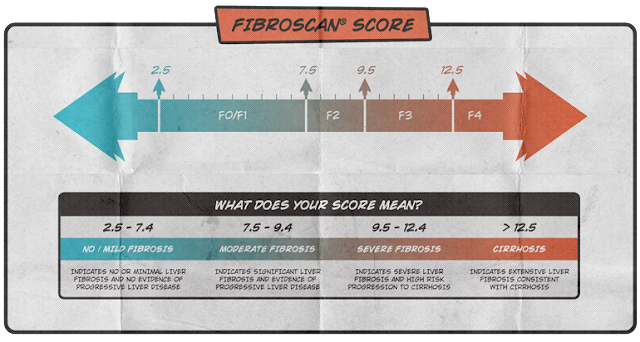 We did get to see his levels for Creatinine (0.77) and Bilirubin T (1.0), but the INR was missing.
I entered his levels into a MELD score calculator I found online, which you can use yourself by
CLICKING HERE.

FYI when you try to type in any number that is below 1 (which I did because Jake's creatinine level was just 0.77), it will round up to the next highest number.

Since I didn't have an INR score for him (in the paperwork that was sent to us by his doctor's office after I requested it), I entered "1" just to see what would happen, and his overall score came out to a 6 (again, it used to be 28). Just to see what would happen if I changed the INR to a "2," the MELD score jumped way up to a "14"!!  So I knew that couldn't be the right number to use, since the last 2 times he DID get MELD score readings, they were at 9 and 8 respectively (almost 2 years ago), so I am going to assume that "1" is the correct INR score to use. Since his Fibroscan showed he no longer has cirrhosis, he could run a mile in about 8 1/2 minutes (a year ago), and just went on a 12 mile hike, it's probably safe to say that his INR hasn't exactly gotten worse.

If my assumptions and calculations about his INR score are correct, his MELD score is at a "6"... which is apparently (according to this chart), as low as it can get. For some reason Jake's doctor gave him the impression, in 2014, that an "8" was as low as it could get, so we never bothered asking about his MELD score again.

Recently, a troll who'd tried to post nasty comments on my blog was bragging about how his MELD score was a "6" - and insinuating that my husband couldn't possibly have healed since his score "was still so high" (he was looking at a very old picture I'd posted of my husband's MELD scores, shortly after he left the hospital). As Steve Martin would say, Excuuuuuuse Me, for not having the time to re-calculate his current score and post an update (I just assumed most people have enough brain cells to figure out it was an old picture). I've been a little busy this year trying to help people with cirrhosis, while you've been lounging on beach chairs in Florida. But hey... thanks for motivating me to look this up!
Again, you can calculate your MELD score via this chart, by
CLICKING HERE. 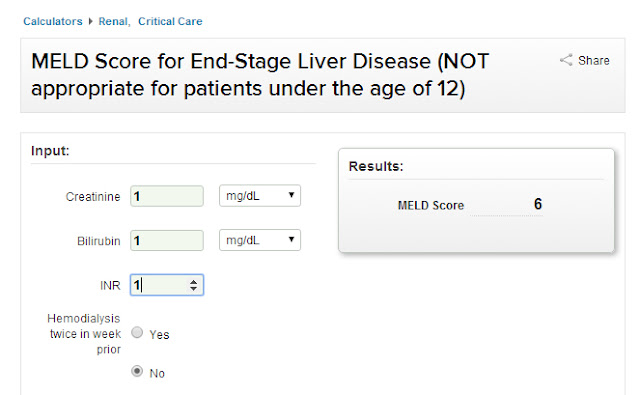 Again, if you cirrhosis, you are supposed to be under a physician's care, and get your blood checked regularly. And you're supposed to get your MELD score from him. So if you haven't already seen a doctor... please go do that.